The Ethiopian wolf has short guard hairs and thick underfur, which provides protection at temperatures as low as −15 °C. Its overall colour is  to rusty red, with dense whitish to pale ginger underfur. The fur of the throat, chest and underparts is white, with a distinct white band occurring around the sides of the neck. There is a sharp boundary between the red coat and white marks. The ears are thickly furred on the edges, though naked on the inside. The naked borders of the lips, the gums and palate are black. The lips, a small spot on the cheeks and an ascending crescent below the eyes are white. The thickly furred tail is white underneath, and has a black tip, though, unlike most other canids, there is no dark patch marking during the wet season.

(August–October), and there is no evident seasonal variation in coat colour, though the contrast between the red coat and white markings increases with age and social rank. Females tend to have paler coats than males. During the breeding season, the female’s coat turns yellow, becomes woolier, and the tail turns brownish, losing much of its hair.

Animals resulting from Ethiopian wolf-dog hybridisation tend to be more heavily built than pure wolves, and have shorter muzzles and different coat patterns. 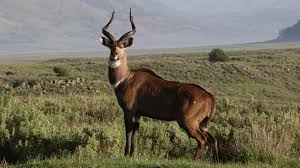 The mountain nyala or balbok is an antelope found in high altitude woodland in a small part of central Ethiopia. It is a monotypic species first described by English naturalist Richard Lydekker in 1910. The males are typically 120–135 cm tall while females stand 90–100 cm at the shoulder.

The mountain nyala was first  by English naturalist  in 1910. Its scientific name is Tragelaphus buxtoni. The species has been classified under the genus  of the family,The mountain nyala was first brought to  in 1908 by Major Ivor Buxton, after whom the species has been named. Major Buxton, who had returned from a hunting trip in , first presented a specimen he had shot to British taxidermist , who later on notified Lydekker about the discovery. It was the last large antelope to be discovered in Africa The spiral horns and white markings on the face and across the flanks established it as a species of Tragelaphus. Lydekker believed that the species was related more closely to the  (T. angasii) than to the two kudu species (then placed under the genus Strepsiceros). In fact, mountain nyala’s similarity to both Tragelaphus and Strepsiceros led to the merger of the latter into the former genus.

In 2005, Sandi Willows-Munro of the  carried out a  analysis of the nine Tragelaphus species.and datae were compared. The results showed that the mountain nyala is sister  to  (T. scriptus),  (T. spekii) and  (T. eurycerus) in the mitochondrial tree (phylogenetic relationships obtained using mitochondrial data). However, in the nuclear tree, kéwel, mountain nyala and sitatunga plus the bongo are three equal branches. Hence the mountain nyala forms a  with these three species The greater kudu clade split from the clade formed by mountain nyala, bongo, sitatunga and kéwel approximately 8.6 million years ago. 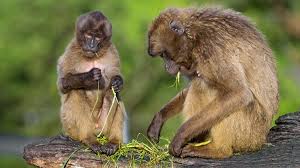 When it comes to primate species with fascinating idiosyncrasies, geladas do not disappoint. These highland monkeys, also known as gelada baboons and bleeding-heart baboons, are highly social, occupying herds that are several hundred or even 1,000 strong. Found only in Ethiopia, this iconic species is a big tourism draw for Simien Mountains National Park, along with other endemic but threatened wildlife like the Ethiopian wolf and the Walia ibex. Geladas are unique in the monkey world. Their diet is almost entirely grass, but they have impressive canine teeth — especially the males, who rely on their fearsome fangs not to eat but to signal dominance or to fight. They are terrestrial, or ground dwellers rather than tree dwellers. When feeding, they use a “shuffle gait,” meaning they move along seated, without lifting their feet. To keep safe at night, they sleep on cliffside ledges where hyenas and leopards will not be able to get them.

Geladas have very noticeable hourglass-shaped bare patches on their chests, which go from pink to livid red when females are in estrus or males are dominant. On females that are ready to mate, a ring of fluid-filled blister pearls forms around these patches.

With their leonine capes of flowing blonde hair, gelada males cut an impressive figure when running. Dominant males lead harems that include up to a dozen or so females, their young, and 1-4 subordinate males.

Outside of these harems are roving bands of frustrated bachelors, who regularly wage attacks on the leading males in hopes of taking over a harem. Only the alpha male in a harem has mating rights, although studies have shown gelada females do “cheat” with less dominant males, and the pair will try to hide the infidelity by making fewer vocalizations while mating.

Research about geladas in recent years has covered a variety of subjects. One study showed that geladas combine lip smacking with vocalizations in rhythms similar to human speech rhythms. Another found that females spontaneously miscarry fetuses when a new male takes over their harems. (This response, whose mechanism is unexplained, could benefit females by freeing them to mate with the new leading male.) Scientists have also captured remarkably intimate video of geladas giving birth. 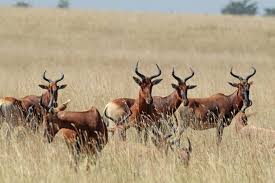 The common African hartebeest has fifteen races of which two are already extinct and Swayne’s is seriously endangered.

In 1891-2, Brigadier-General Swayne, who discovered the animals, was the first European to visit the area well south of the Golis range of Somaliland and about 200 kms. (125 miles) from the coast. The plains were described as “covered with hartebeest, 300-400 to a herd and a dozen or so herds in sight at any time”- Herds of a thousand individuals were observed. Within fifteen years the tens of thousands in Haud and Ogo that Swayne had seen had dwindled to such an extent that he estimated only about 880 remained. This rapid decline was due to the rinderpest, which swept Africa during the last century. The Somalis “went out daily and pulled down the sick animals with their bare hands in order to take the hides”. Military campaigns followed in which the armed forces were permitted to kill as much game as they wanted. Arms flowed in and in the unsettled conditions which prevailed hunters very efficiently, and in a very short time, had almost succeeded in wiping out the remnants of the Oryx and Hartebeest herds in the area.

Hartebeest are almost grotesquely long-faced and have high withers and sloping hindquarters. The horns, carried by both sexes, are doubly curved and mounted on a pedicle. Some authors still consider that according to the shape of the horns, which is supposed to be the most important diagnostic character, each race of hartebeest should enjoy full specific rank. However, the presence of hybrid forms has led zoologists to regard them as a sub-species, and it is now generally accepted to classify them as geographic representatives of the same species.

Three types of horns can be distinguished in the buselaphus group:

Swayne’s is the eastern race of tora to whom it is closely related, both species being smaller than the uthers, but is distinguished from it by its considerably darker body colour. It is a deep red chocolate brown or chestnut with a fawn or cinnamon coloured rump, tail and lower half of legs. The tail tuft is black. Its face and upper parts of its body have dark blackish markings: a black stripe from the shoulder to the knee, a black smudge on the flanks, and black markings on the outside of the hind limbs are typical, but on the darkest individuals these black markings do not show clearly in the field. Adult specimens sometimes have a silvery appearance as the hairs are tipped with white. The horns are fully expanded and shaped like those of the tora; and curve out- wards and slightly downwards from the top of the head and then sweep upwards at the tips, and are usually, but not always, hooked backwards and they may or may not turn inwards. 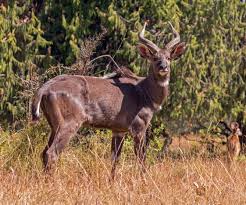 Belonging to the same family as the Mountain Nyala, the Kudu, the Bongo and the Eland, the bushbuck shares with them the family characteristic of shy and elusive behaviour. Over forty races of bushbuck have been identified, which vary considerably both from the point of view of colouration and from the type of habitat they frequent. Most of them are forest- living animals inhabiting dense bush, usually near water, though this is not an essential, as some of them have been known to go without drinking for long periods when necessary.

Of the two Ethiopian races, meneliki and powelli, the latter is the more common and somewhat smaller. But Menelik’s is also fairly widespread and can be seen in much of Ethiopia’s highland forest up to the treeline at 4,000 metres (13,000 ft.) They are com mon, for example, in the cedar forests of Menagesha and parts of the Entoto range, even ir, eucalyptus groves as long as there is still some ground cover. No accurate estimate has been made of their total population because of their nocturnal and furtive habits. Like the Mountain Nyala, they are easier to observe in the Bale Mountains National Park where they are fully protected and therefore a little less shy. Powelli inhabits the lower lying country, so between them they cover almost all types of habitat, from highland forest to savanna woodland – with the exception of open country.

In Bale, as you climb up through the hagenia forest with its flowering trees, and enter the zone of Giant Heath and St. John’s Wort, sunlight dapples the ground beneath your feet, lichens hang softly from every twig and bright dark green mosses clothe the branches. Suddenly a glimpse of bright chestnut draws your attention to the female bushbuck, and usually not far away is the shining dark, almost black, male. Bushbucks are often solitary, but in Bale anyway, Menelik’s is almost always seen in pairs or small family parties of female and young. They are extremely beautiful little animals, with a coat longer than that of other bushbucks, perhaps because of living in the lower temperatures of high altitudes. The horns, which are carried only by the male, have a spiral twist and a well-defined longitudinal ridge or keel on the front or back surfaces, and transverse rings. The record horn length is 34.93 cms. 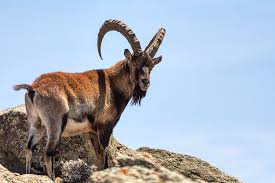 Walia ibex is endemic mammals of Ethiopia confided to Semien Mountain National Park. It is ungulate of a medium. Indeed, pyrenaica) and the walia, or Abyssinian ibex ( C. walie), which has been reduced to a single population of about 400 individuals in Ethiopia